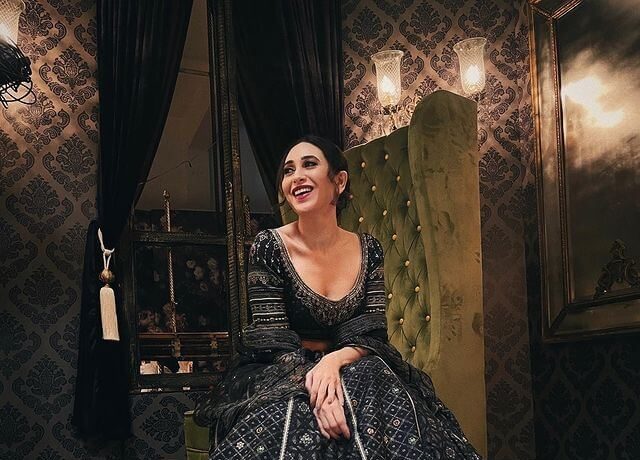 Karisma Kapoor is one of Bollywood’s most fashionable mommies, as proved by her Instagram feed. The former actress ordinarily draws attention with her individual sense of style. Look at how beautiful she is.

Read More: Janhvi Kapoor In Jumpsuits: Trend That Never Goes Out Of Style

Karisma Kapoor In A Midi Dress 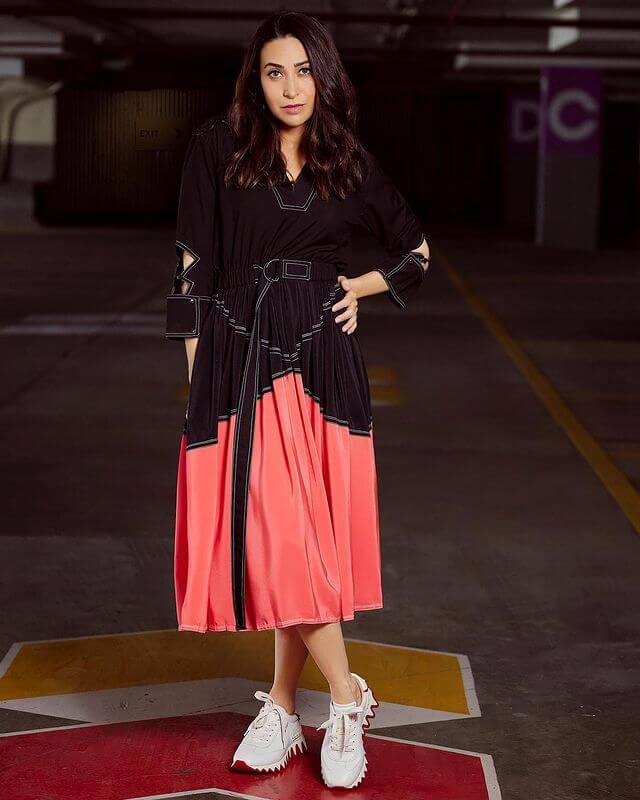 Karisma Kapoor is wearing a black and pink midi dress in this picture, and she accessorized it with a pair of sneakers. She released a number of images showing that she’s wearing a Lovebirds dress that was styled by Ami Patel. This mid-length outfit had a V-neckline, three-quarter sleeves, and an integrated belt made of elastic fabric with a buckle. 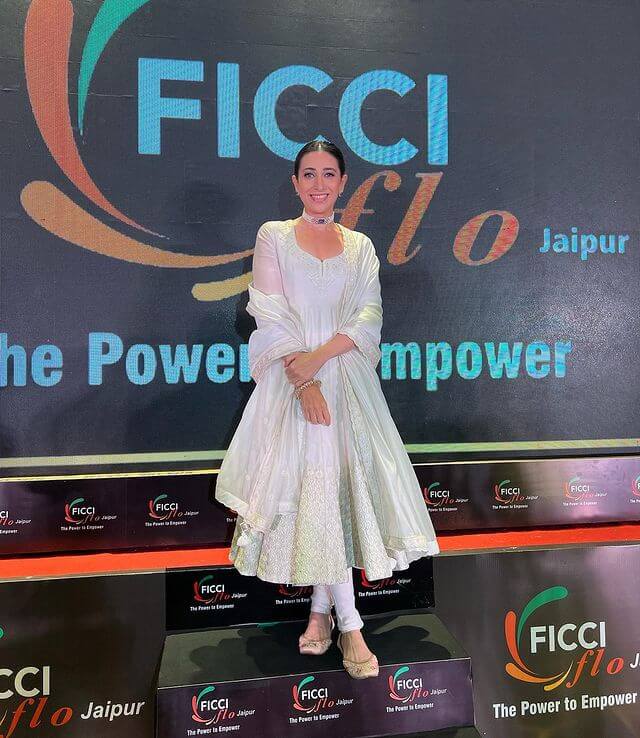 Karisma Kapoor recently made a gorgeous arrival at an event while also demonstrating how to dress appropriately for the Indian summers by selecting a white Anarkali ensemble from the designer label Punit Balana. The elaborate coin embroidery on the chanderi silk outfit is complemented by a matching churidar and organza dupatta. The diva chooses pearl bangles and a choker to go with the ensemble and neatly buns her hair. The actress’s barefaced makeup, kohl eyes, and white mojari look stunning with her attire. 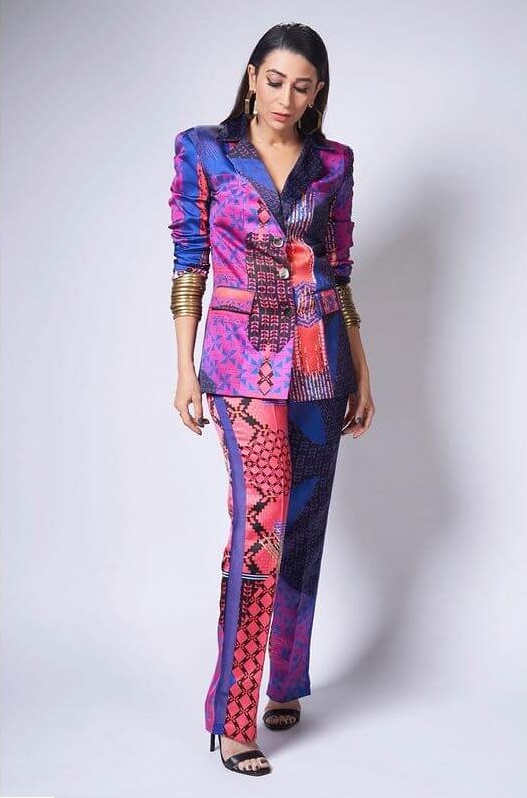 The actress donned a vibrant pantsuit from Manish Malhotra’s self-named line for a special appearance on the reality series India’s Got Talent Season 9. She made power dressing seem chic and rocked it with the highest glam, need we say more? 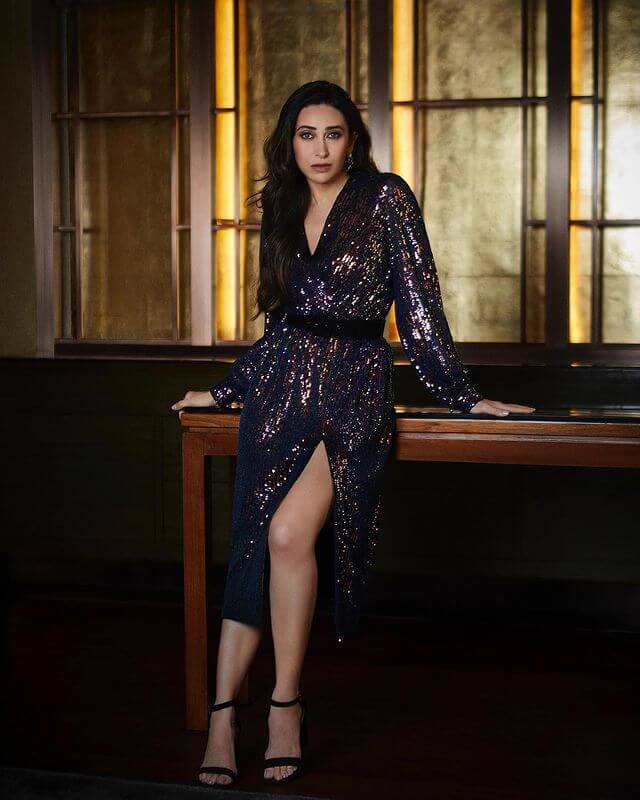 The Roxbury dress by Rebecca Vallance, which had blouson sleeves and an overlapping pattern for the v-neckline, was styled on Karisma Kapoor by stylist Tanya Ghavri. The black belt that tightened her waist and secured the dress around her was just the stylish accent the dress required to maintain its exquisite beauty. And do you see that thigh-high slit? This is the sexiest accent that every party dress must have. Out House Jewellery’s ring-shaped pearl stud earrings and Eridani’s black ankle-strap heels completed her ensemble. 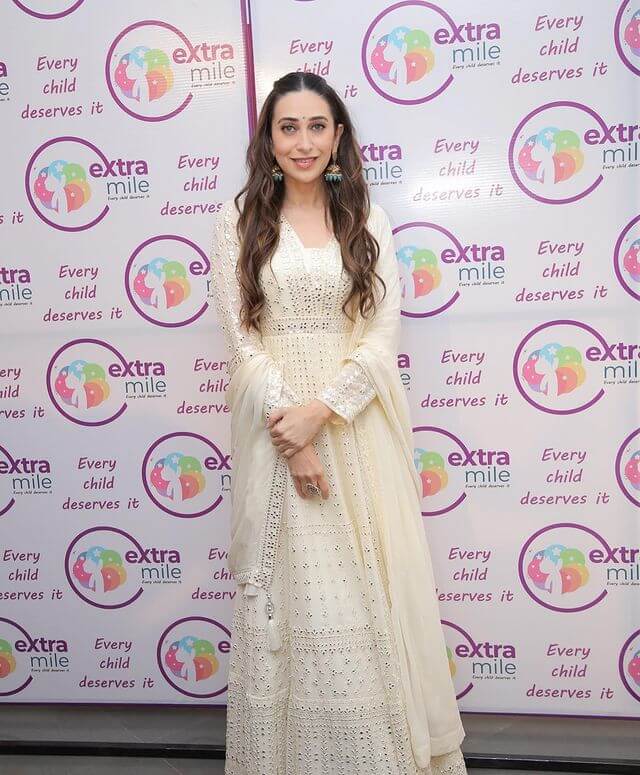 Karisma recently wore an ivory Anarkali from Neeru’s India to the opening ceremony of a charity event, and we think it looks just stunning. The Anarkali is embellished all over with mirrorwork in flowery motifs. This is true of both its neckline and its long sleeves. It is worn with a dupatta that has tassels and these intricate details on the hem. She chose to wear less bulky jewelry, opting instead for a simple ring and a pair of rusted silver jhumkas decorated with turquoise. She finished off the appearance with a straightforward hairstyle, flushed cheeks, a blue bindi, and soft lips. 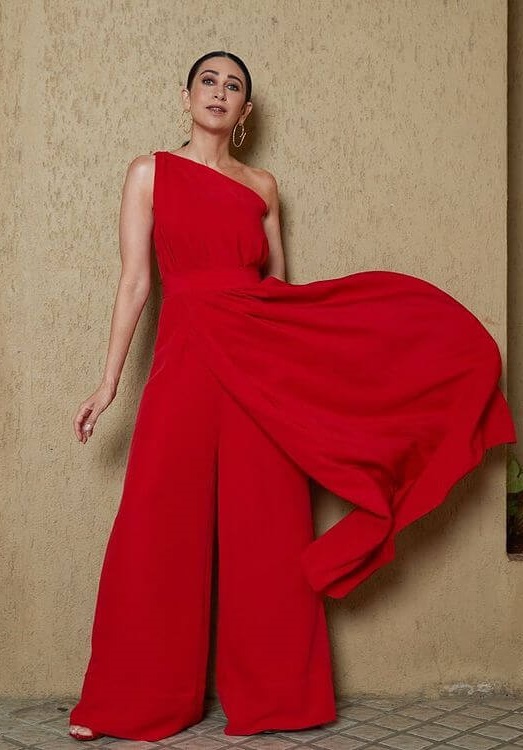 The actress looks gorgeous in her red jumpsuit gown. The lovely drape’s fluidity, the tie-up feature at the back, and the bare shoulder all contribute to the outfit’s casual elegance. We can’t take our eyes off Karishma or the gold hoops that round off her outfit! 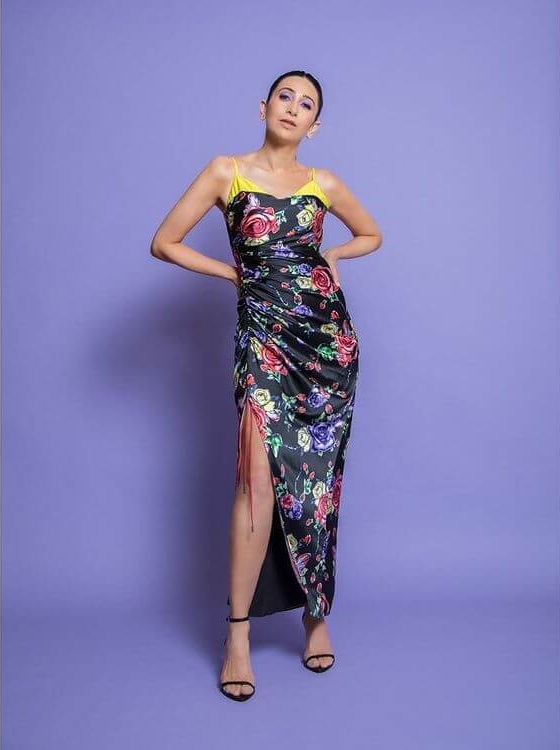 In a Prabal Gurung dress, the diva seemed stunning as always. One side of the black floral dress has a thigh-high slit. Her outfit was finished off with a tidy hairdo and matching black heels. 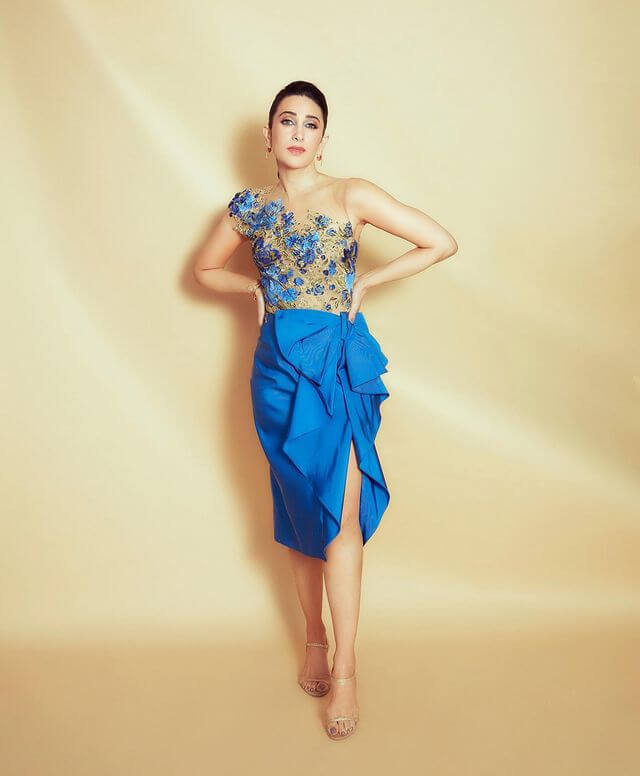 Karisma Kapoor looks stunning as she wears a short, one-shoulder dress. In the body-con dress, Karisma Kapoor displays her incredibly voluptuous form. Karisma’s clothing is beautifully embroidered with ochre, gold, and blue Resham threads. Karisma Kapoor completes her ensemble with a pair of striking earrings and a tidy ponytail. 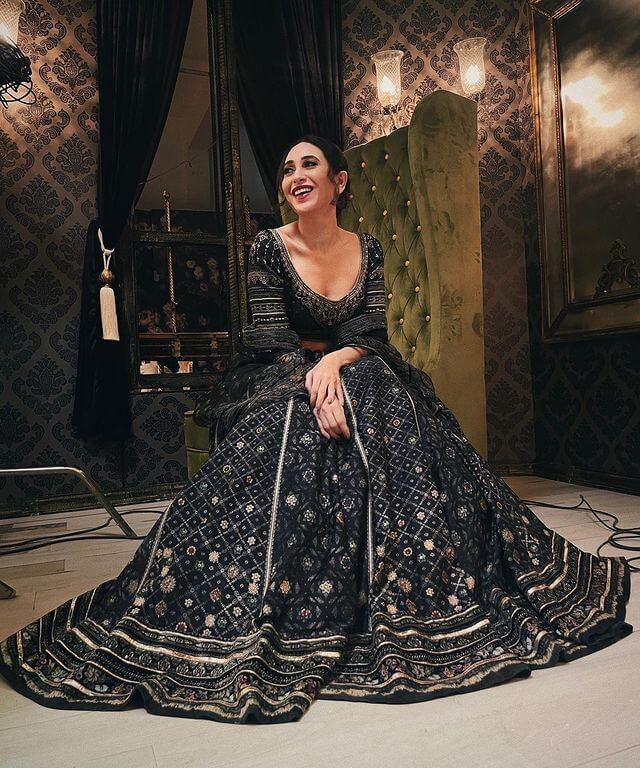 In a black Tarun Tahiliani lehenga, Karisma Kapoor appears to be floating in space. She wore a Tarun Tahiliani handwoven lehenga in black and white that was lavishly embellished. Karisma paired the heavy lehenga with a low-cut blouse and a thick dupatta for styling purposes. Tarun Tahiliani is the designer of the black, beige, and white lehenga with three additional sleeves. She maintained her signature breathtaking appearance, complete with smokey eyes, thick eyeliner, and a striking maroon lip. 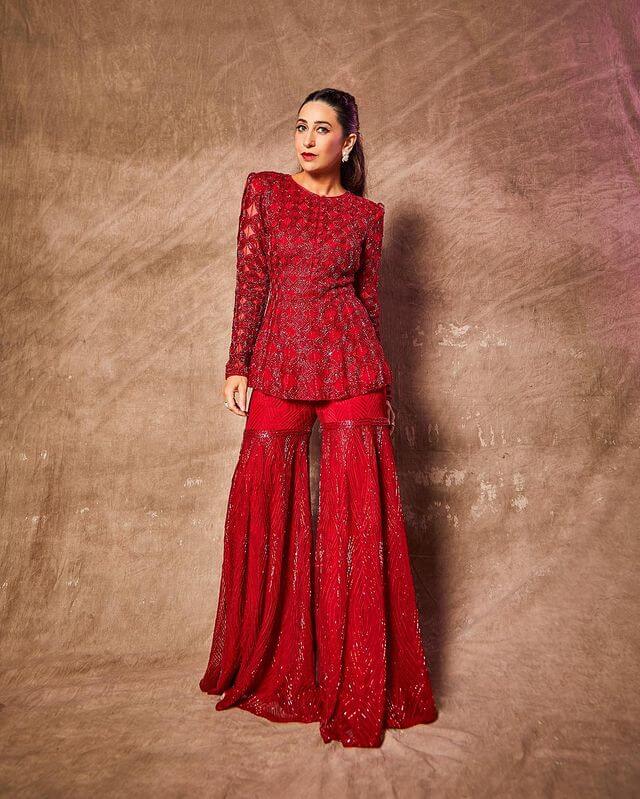 When Karisma Kapoor chose the geometrically patterned, hand-embroidered, ruby red sharara and peplum-style kurta combo today, we were all in awe. Lolo chose a straightforward pair of beaded earrings for Indian Idol and put her hair up into a short ponytail to keep it out of her face. The actress’s makeup included filled-in brows, kohl-lined eyes, rosy cheeks, and ruby red lips that complemented her attire. 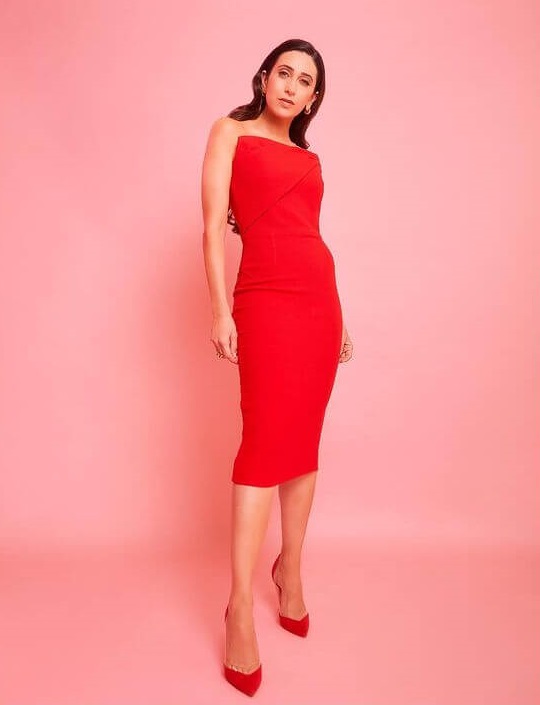 Red plays a significant role in Karisma’s sense of style. And this very look is evidence! She kind of makes it plain that simplicity is the new fashion trend as she wears a stunning red tube dress from Roland Mouret and charming gold-tone earrings. 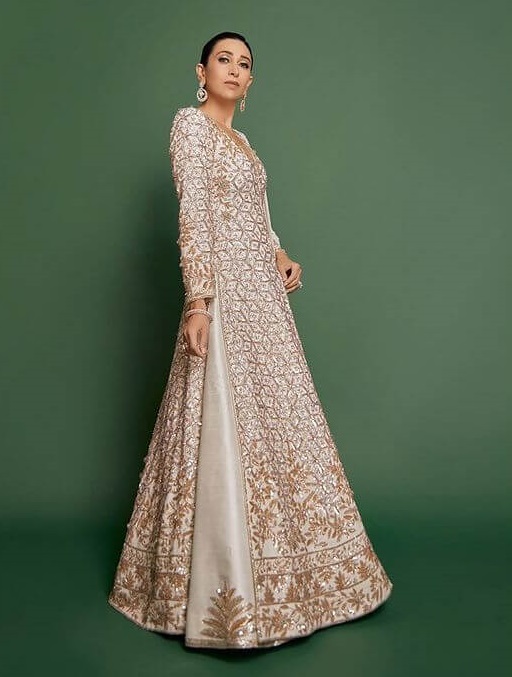 There is nothing quite like an off-white outfit with gold embroidery. It’s a very feminine and attractive combination that is also incredibly calming to the eyes. In this fully embroidered Anarkali, Karisma Kapoor looks just as stunning, and we really adore how she is accessorized with a set of statement earrings and a side-parted hairdo. 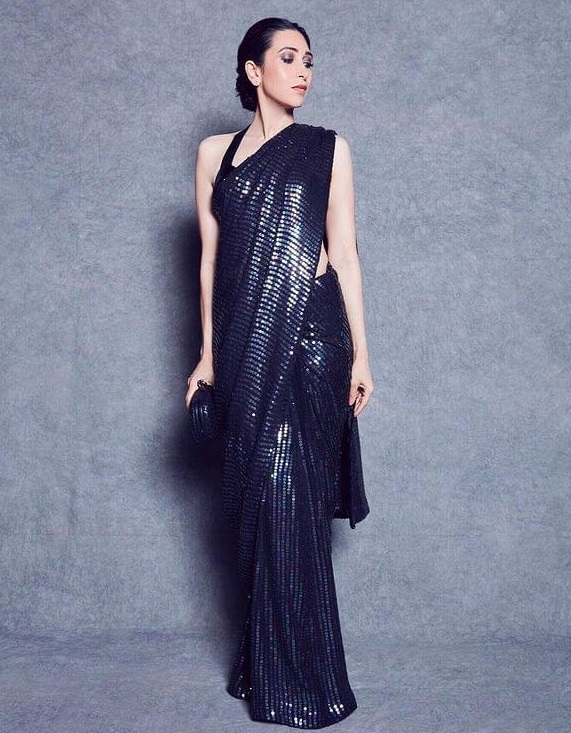 Karisma Kapoor wore a halter-neck top and a black sequin saree from Manish Malhotra’s line. This saree with a lot of sequins looks elegant and suitable for the holiday season. We adore it when worn with a blouse that almost has no back. Here, Karisma opted to maintain a slightly silvery-smoky makeup look. Her hair looks amazing in a stylish bun! This was the outfit Karisma wore at the designer’s after-show party following the Lakme Fashion Week show. 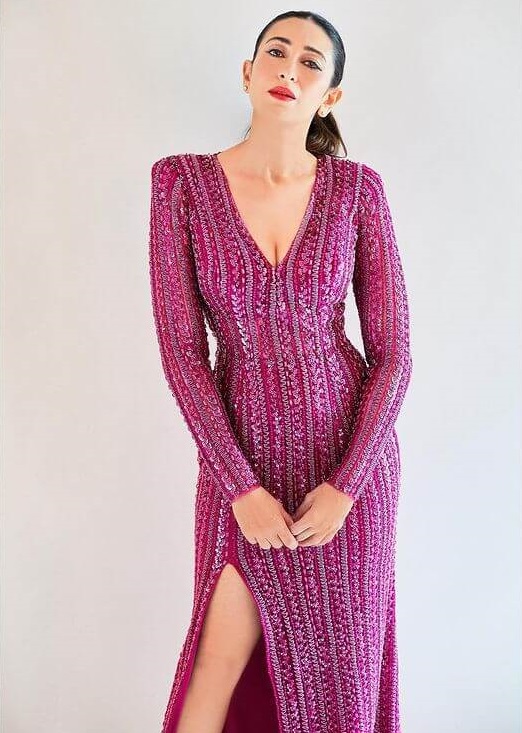 The actress recently showed up in style for a dance reality TV event. She was dressed in a vibrant pink evening gown by Zara Umrigar. The completely embroidered dress had a slit that reached her thighs. She chose a simple pair of diamond stud earrings rather than wearing any heavy jewelry, letting her gown take center stage. Her outfit was completed with a pair of revealing strappy shoes.

Karisma really embodied glam with her trendy attire. How do you feel? Comment below with your remarks on this article and let us know. 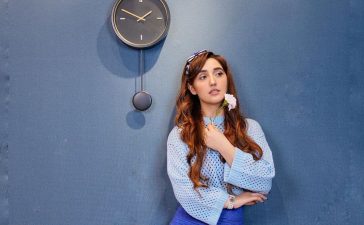 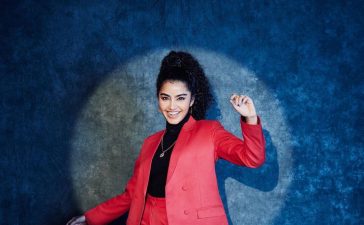 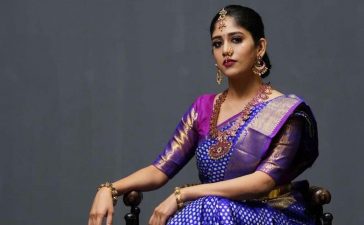 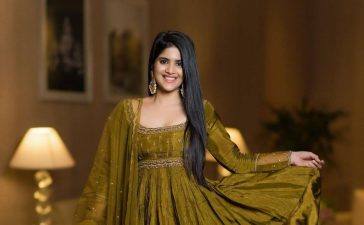 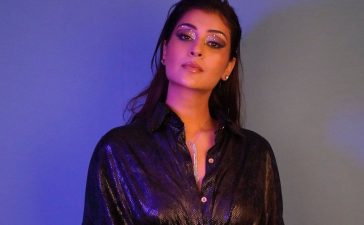