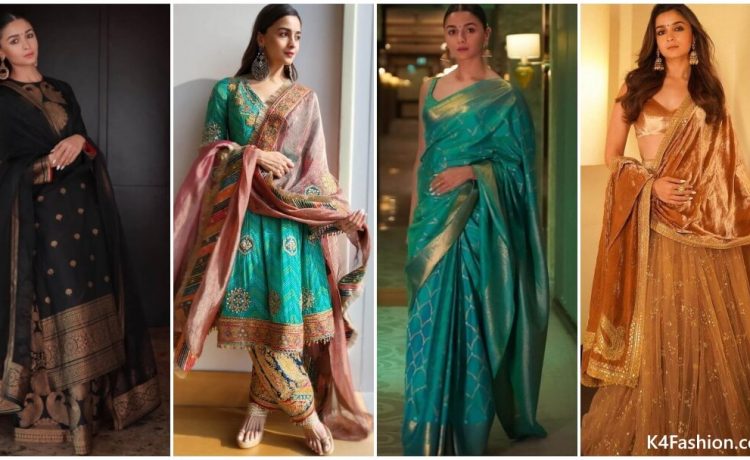 Are you looking for traditional fashion outfits?  Your search is over. Alia Bhatt’s RRR Movie Promotional Wardrobe is the best option for you. Come have a look at these stunning outfits worn by her.

Alia Bhatt is the most charming actress in Bollywood and is loved for her childish behavior. She is like a child trapped in an adult body. Alia is a fun-loving person but when it comes to her work, she is equally talented and all her films are super hits and loved by her fans. Alia Bhatt is making her debut in Tollywood with her new upcoming south movie RRR which is directed by S.S. Rajamouli and produced by D.V.V. Danayya.

The fashion sense of Alia Bhatt is an inspiration for fashion enthusiasts. She always carries her outfit with full elegance and confidence. Alia’s traditional, western or indo-western, all looks are a must-try for female following. During the promotion of her upcoming south movie, she wore stunning outfits and raised the bar high. 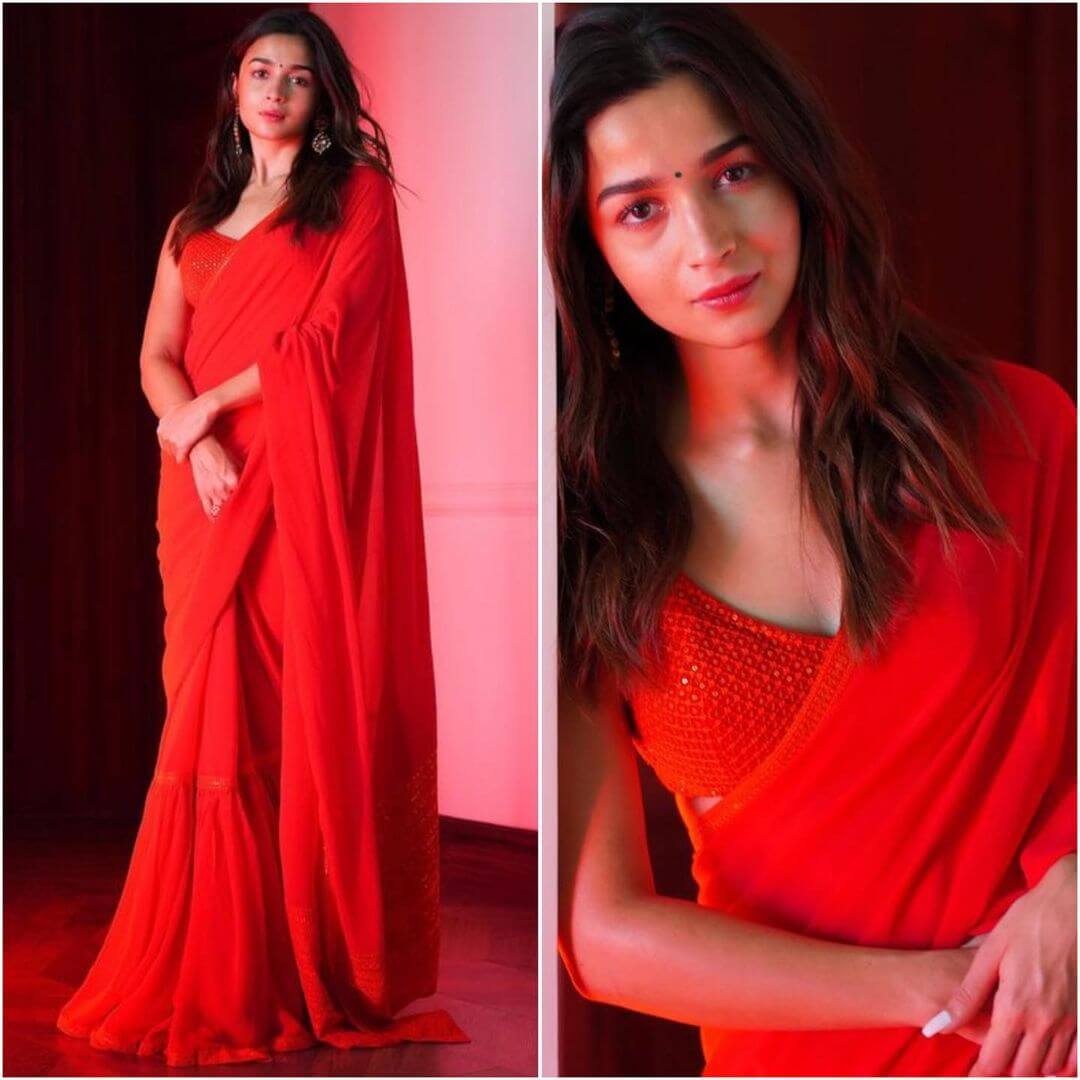 During the trailer launch event of RRR, Alia wore a siren red saree and looked extremely hot in it. This red hot saree was taken from the Sabyasachi saree collection and was styled by Ami Patel.

Alia kept minimal jewellery on which included only a pair of earrings. Makeup was kept subtle with hot blushy lip shade and round black bindi. Alia left her hair open with soft beach curls. 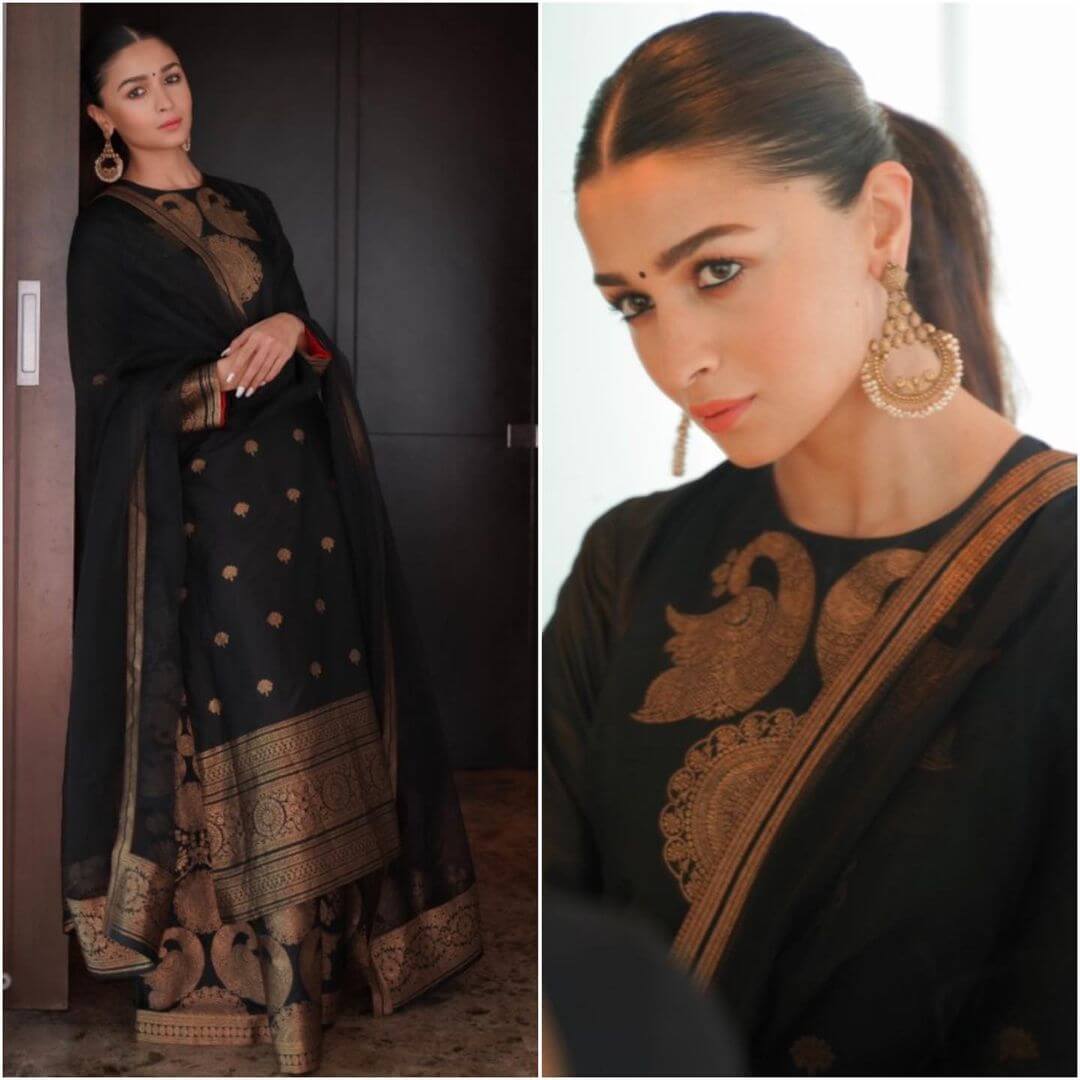 At another promotional event, Alia wore a black brocade outfit by Payal Khandelwal and acquired the traditional look. Her dress included a black round neck, a full sleeve suit with huge golden borders, and motifs paired with palazzo and dupatta.

Alia looked amazing in the middle part ponytail and light makeup. The statement jewelry included drop gold earrings. She applied kohl eye makeup with hot pink lips and a white manicure. The round black bindi added to the look. 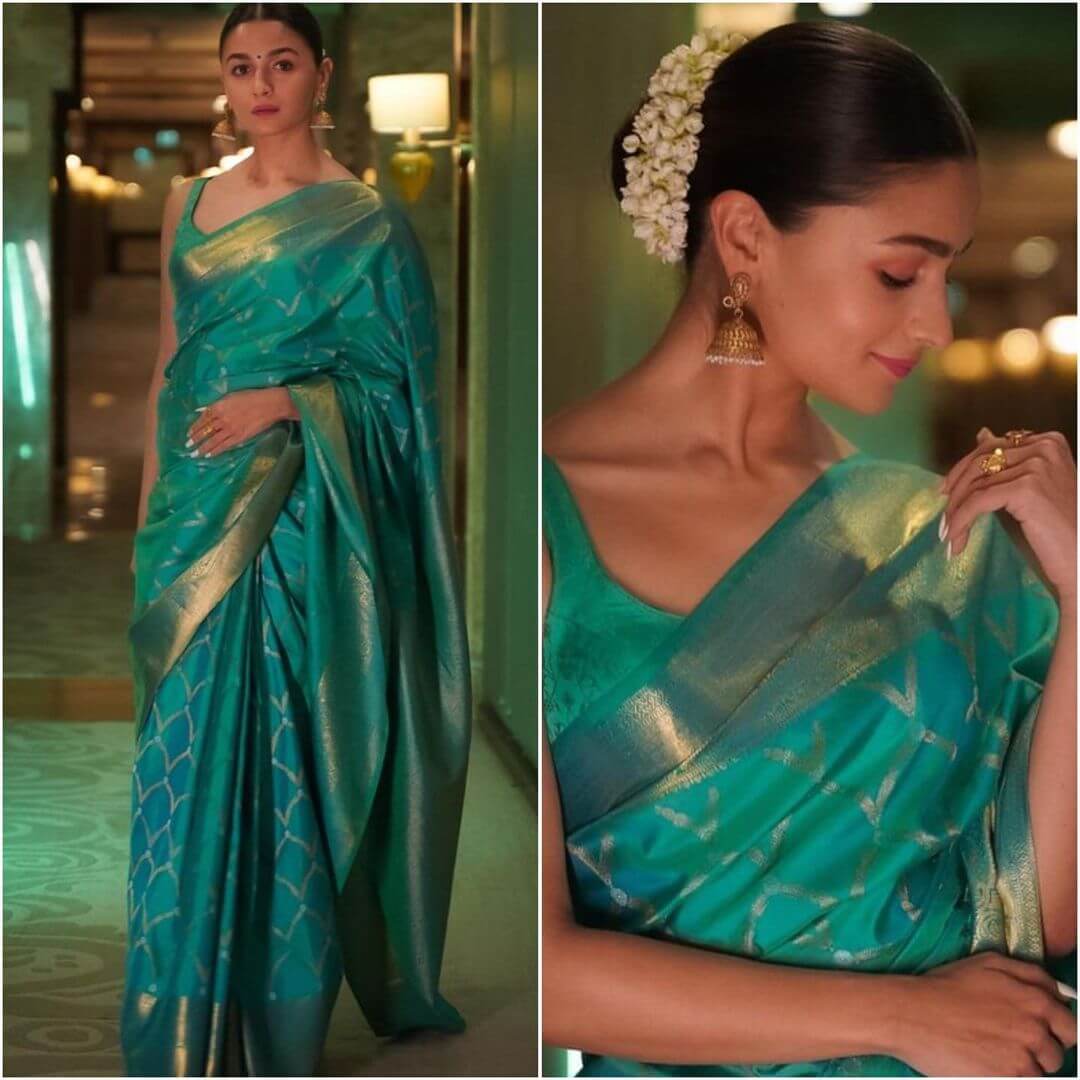 Everyone was left awestruck when Alia wore this ocean blue Kanjeevaram saree during her movie’s promotion in Chennai. She added the south Indian touch to her attire for the promotion of her upcoming south Indian movie- RRR.

Alia Bhatt styled her Kanjeevaram saree with golden round jhumkas. The middle part sleek bun was decorated with gajra which added to the beauty. The subtle makeup with pink lips and black bindi looked amazing. It is a perfect traditional look one can opt for. 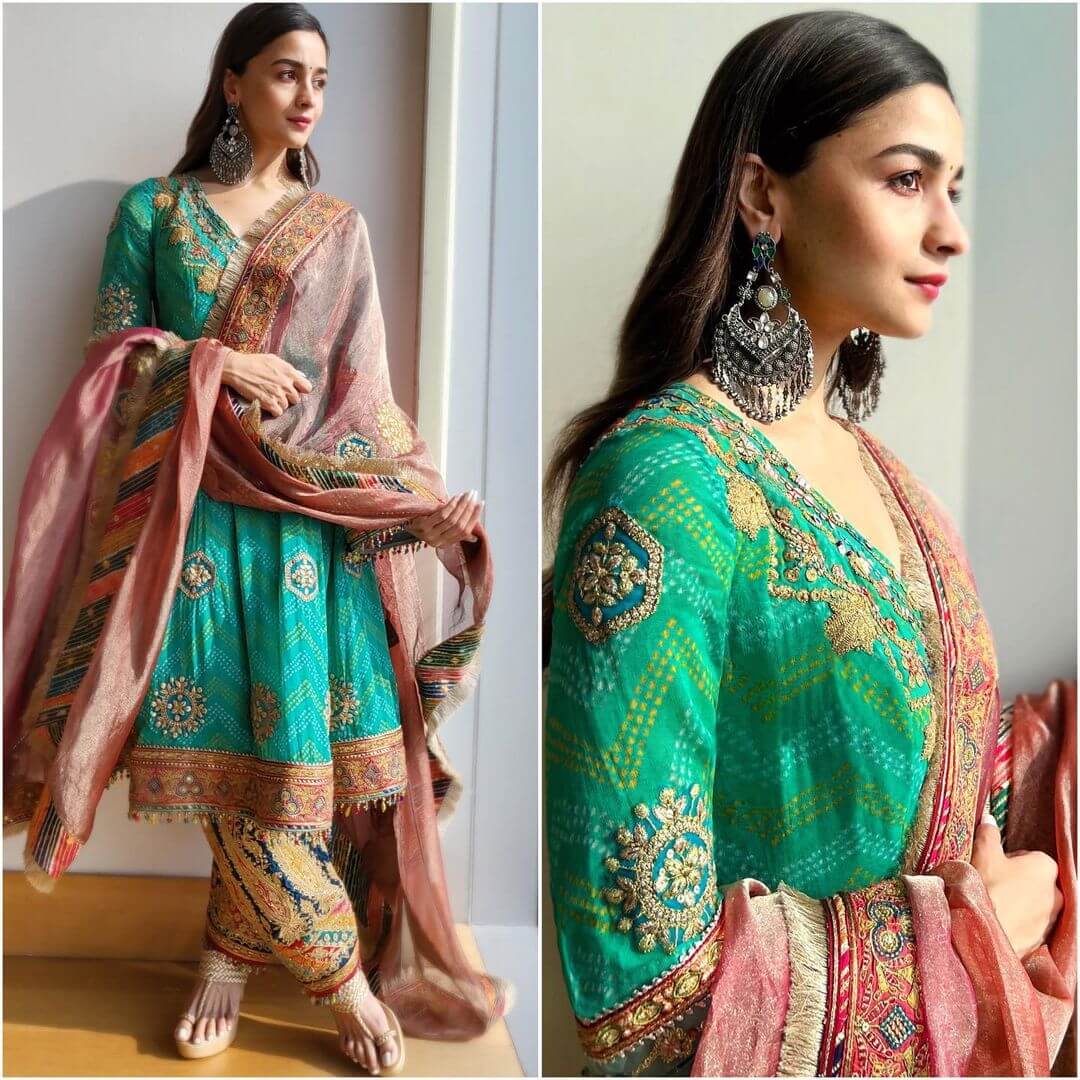 It’s not what you wear, but how you carry what you’re wearing. It makes a huge difference. During her promotion of an upcoming south Indian movie, Alia Bhatt wore a teal blue suit by rimple & Harpreet. She looked beautiful.

The statement jewellery was heavy-dropping jhumkas which went with the dress very well. The actress left her hair open and tucked behind her ears. No-makeup look along with a small black bindi gave a perfect look to the dress. The pink dupatta was personally my favorite. 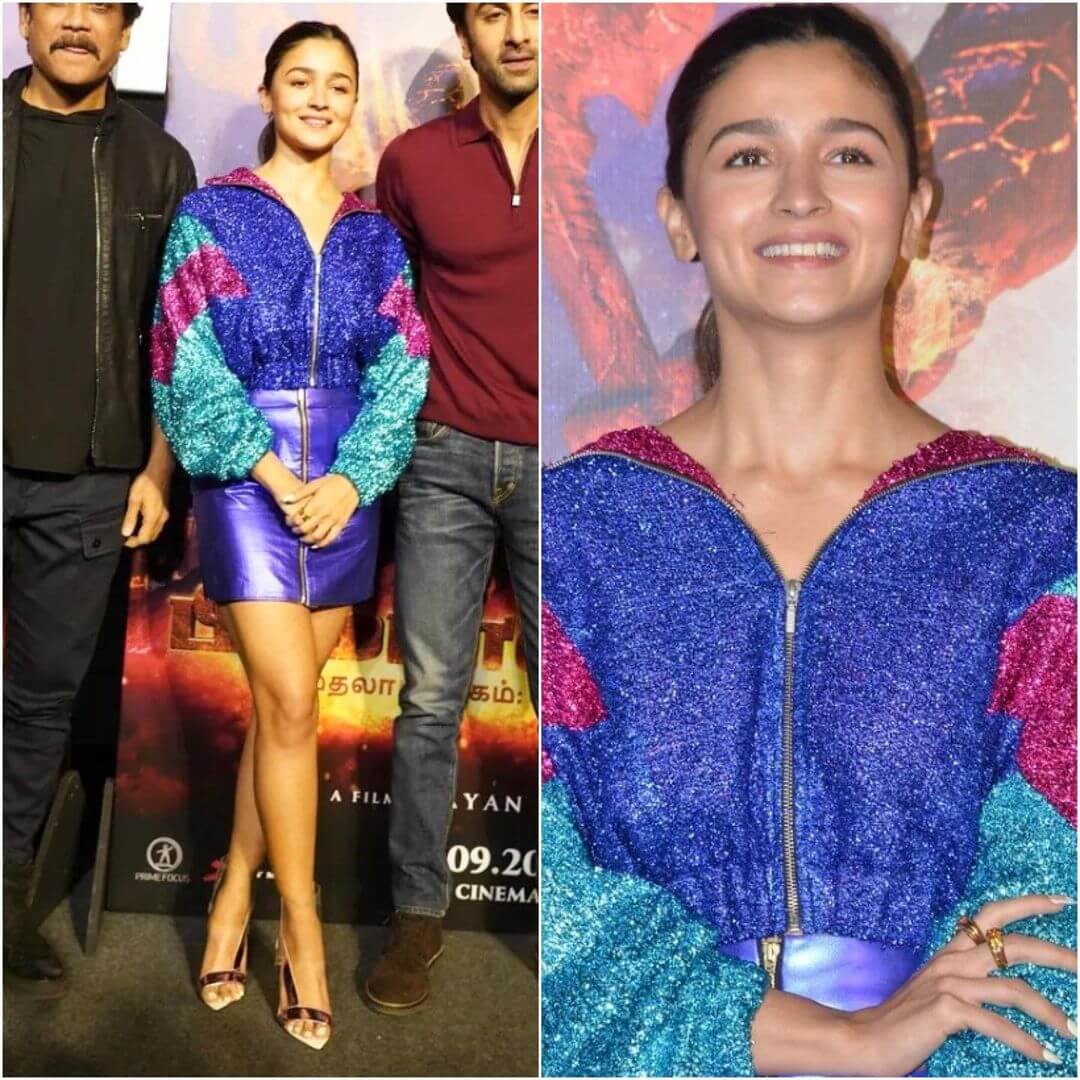 The dress was paired with very subtle makeup, high heels, and a white manicure. Alia Bhatt opted to keep her hair tied in a tight ponytail. Ranbir Kapoor was also spotted with her during her movie promotion. 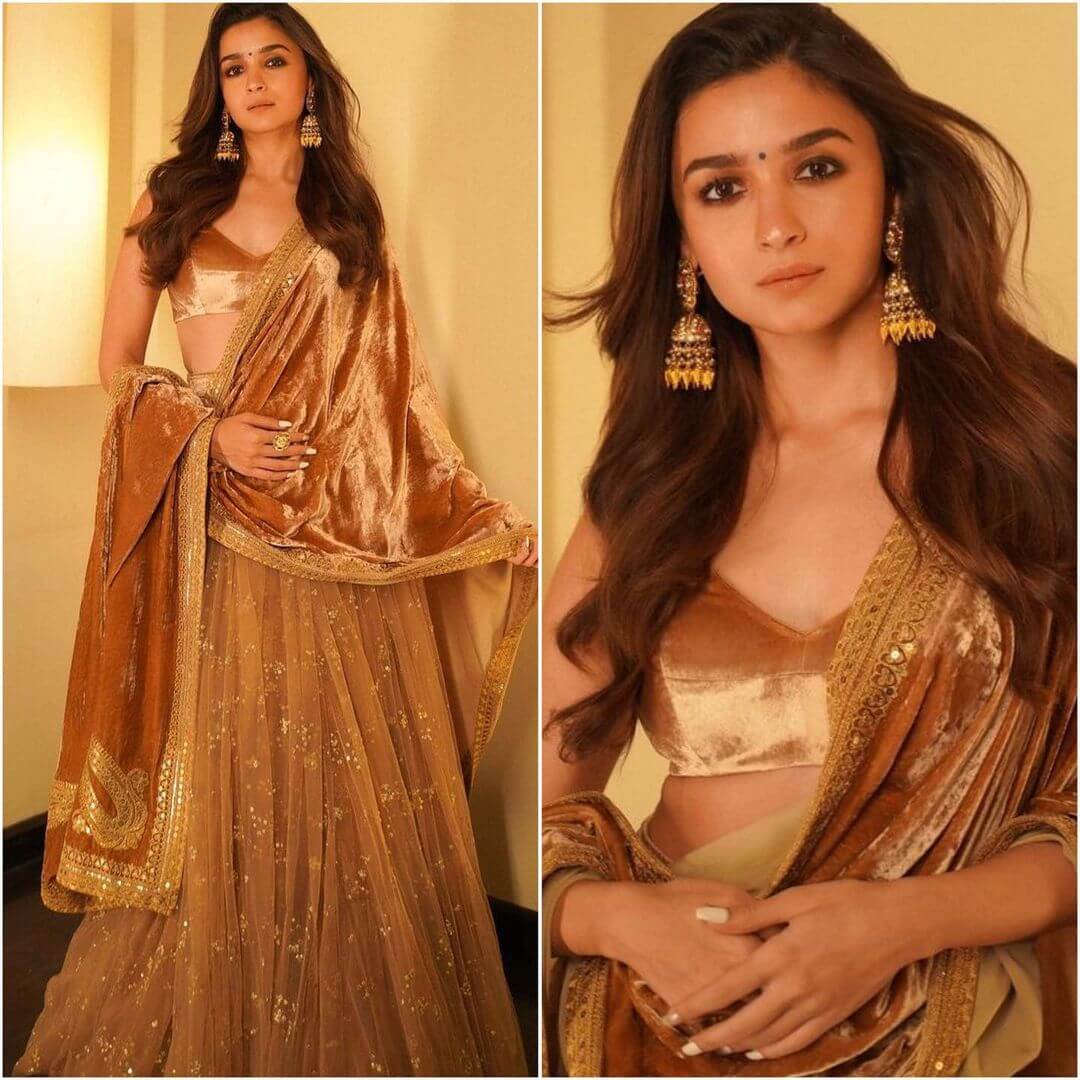 Alia slayed her look in a golden Sabyasachi lehenga. The all- golden theme made her look like a royal princess. The lehenga was made out of net material and the dupatta was of golden velvet material.

The actress styled the dress with golden jhumkas and left her hair open with very soft curls. The black round bindi along with golden lip shade looked amazing and is a trend-setter. 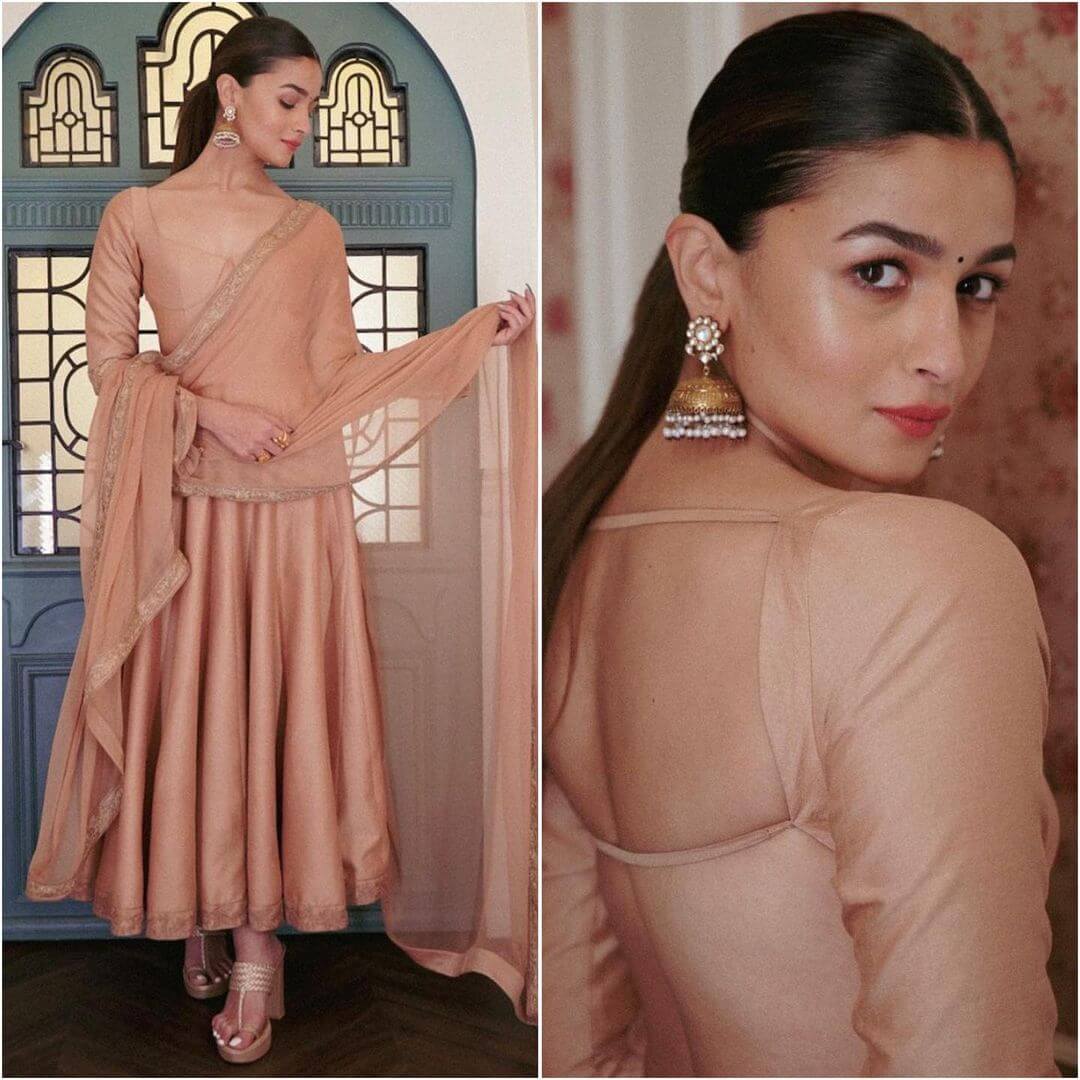 Ohh my my!! I can’t just take my eyes off her. Just look at this nude color traditional outfit by Manish Malhotra. It’s drop-dead gorgeous, isn’t it? The flare suit look of Alia is stunning and she is looking awesome in it.

To keep the look elegant, Alia kept the nude makeup on and just applied a little lip tint with a black round bindi. The minimal jewelry included a pair of round golden jhumkas. The backless design of the flare suit made the look elegant and alluring. 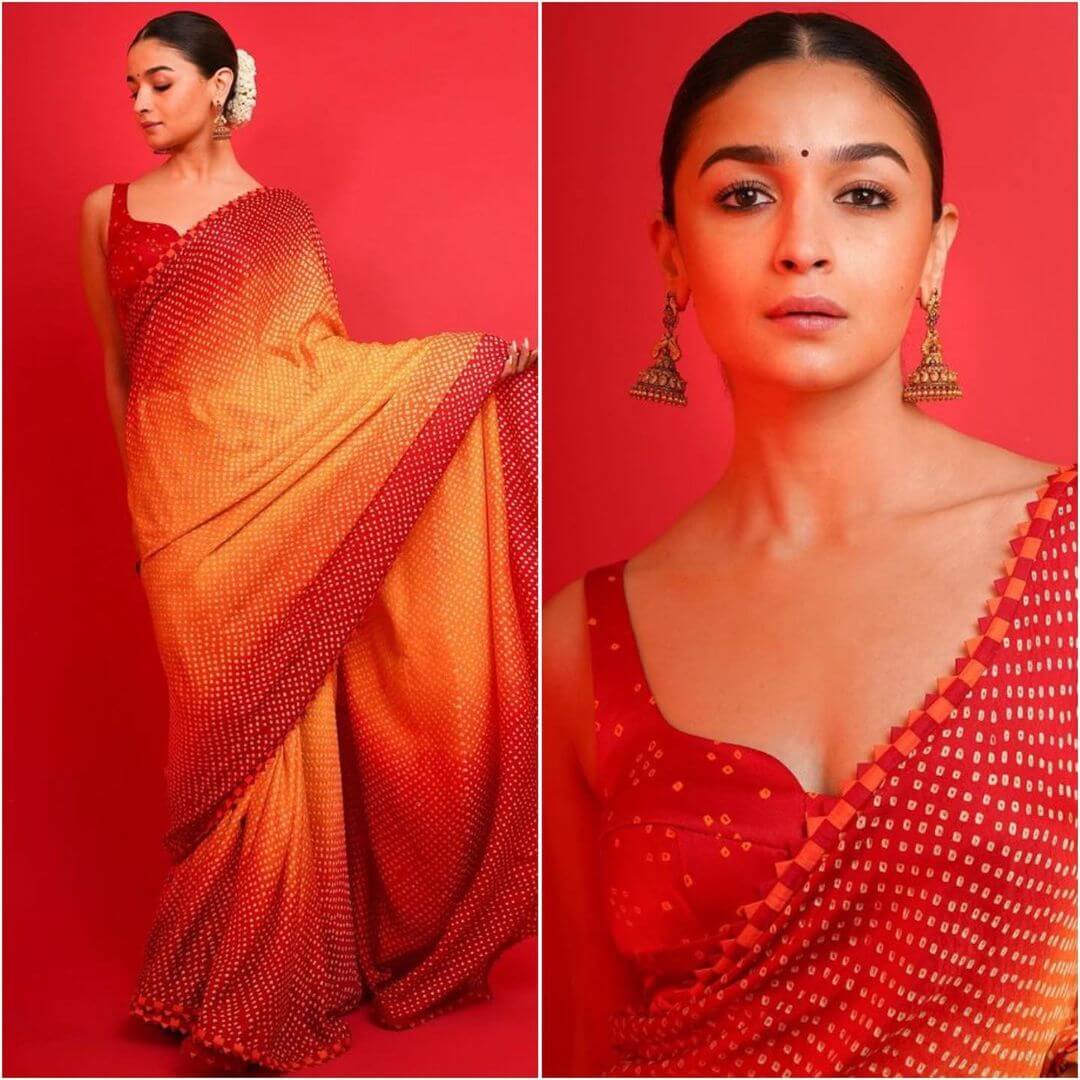 The final look of Alia Bhatt includes a red-yellow bandini saree by Abu Jani & Sandeep Khosla. Alia looks beautifully traditional in this saree. She paired it with round golden jhumkas. Her makeup was kept subtle and added just a round black bindi which gave her a simple yet beautiful look.

Her hair was tied in a neat sleek low bun and decorated with gajra. This look can be tried during pooja and small traditional gatherings at Indian households.

The upcoming south movie of Alia is scheduled to release on 7 January 2022. We wish all the best to Alia for her new movie and we truly believe it will be another super hit film in Alia’s career.