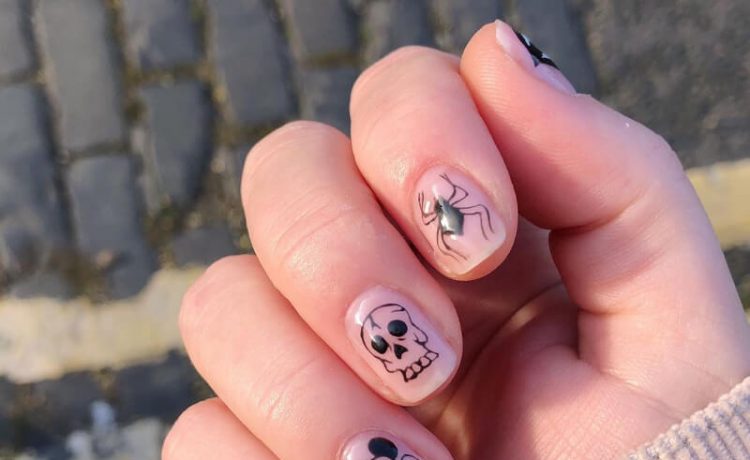 Scary and creepy vibes are liked by a lot of people. They find scary stuff interesting and they all love having Halloween-themed nail art designs all around the calendar. They don’t restrict it to just the Halloweens! And this is rightfully so, as these creepy and unnerving nail art designs look super cool with their horror theme. They bring out some spooky vibes to mess with easily scared people.

The skull patterns look super cutseoe here. They are styled like fruits that also have leaf patterns on them. It’s like cute skull fruits! It’s funky and weirdly cute. French tips are applied at the top of the nails with various shades. A plus point is that the nail paints have a glittery appearance. Colours like blue, purple and black are used in this skull nail art design.

This skull nail art looks very spooky. What’s interesting is that all nails have creepy black patterns. It has a classy look to it. You can sport this awesome skull nail art for adding a nice creepy look to your nails. The nail stickers or patterns include a cobweb, a skull and a spider. One nail has an inscription written in a cool calligraphy style.

This is a funky and cute nail art design you should try out. Cute stickers or patterns are stuck on each of the nails. If you have to go for a Halloween party or simply want the horror feels on your nails, this one is perfect for you. There are patterns of a skull, a spider, a Mickey-themed ghost figure which looks cute and also a cobweb inside the shape of a heart.

This is a quirky nail art design that has skull and skeleton patterns. The base colour is black. And patterns are made with orange, blue, yellow and white. A skull pattern is made on one of the nails. An interesting thing added is the addition of red colour on the lips portion of the skull’s face. It looks quirky and fun along with the creepy vibes. Artistic floral patterns are made around the pattern.

The Red and black combination is used in this skull nail art design. Red nail paint is applied to alternative nails. And the other nails have black nail paint as the base. They also have stickers or patterns which are related to skulls. The skulls are surrounded by roses, which adds a nice balance of styles. One nail has rock band signs, which makes the whole nail art look punk rock-themed.

This is another cool nail art design with skulls and roses. A grinning skull pattern is made on the nails, which looks pretty spooky! The base of nails is a multicolour pattern with pastel colours of various colours. The patterns also have rose patterns, which adds a nice touch to the whole nail art design.

For a stylish and cool nail art design that has a creepy side, this is perfect! Black patterned skulls and leaves are made on the nails. They have a cute and quirky appearance. The top portion of the nails has matte nail paint in various shades. The matte shades look so classy! They include silver, brown, yellow, orange and grey.

Glittery Metallic Skulls with Black Base

This is a fun and quirky nail art design which has patterns of the skull, a carved pumpkin and spiders. The base of the nails is a vibrant shade of pink. They have cool stickers which include a spooky ghost figure which also looks cute with blushes on its cheeks. A carved pumpkin is also styled on one of the nails. One nail has a cobweb and spider pattern while another one has a skull pattern with pink colour over it.

A cartoon-themed pattern or art is made in this skull nail art design. It has a neat and clean look. Black nail paint is used as the main colour theme here. And two nails have been styled in patterns of the skull and it also has the face of a girl. Dots and stars are decorated around the designs. It also has a pumpkin carving.

This is a spooky-looking nail art design that looks awesome! Skelton’s hands are styled on the nails in a manner that makes it look fabulous. It gives off a creepy vibe and you can sport this to any of the horror-themed parties you are going to attend. Your friends will be pretty spooked and also impressed by your style!

Goofy Skulls and Bones with Yellow Base

A bright yellow shade is used as the base in this nail art design. It has golden skull patterns as well bones which looks goofy and fun. It is bright and vibrant coloured nail art which also has creepy designs. This skull nail art design is perfect for us if you want the best of both styles. It has a fun side and also a spooky side. Overall, this is a goofy nail art style that would rock on your nails.

This is a cute and quirky nail art design with skulls and ghost patterns. The patterns look quite fun and cute. The stickers or patterns are of different kinds. It has open-mouthed howling ghosts, smiling ghost figures and sad ghost figures. The skull patterns have been made on the other hand on a black nail paint base.

This nail art design has great detailing and patterns. A lovely shade of purple is used as the main theme colour here. Two of the nails have patterns. One has two heart patterns with flowers around it. And one nail has a skull pattern. What’s special about the skull pattern is the addition of hearts on the eyes of the skull. It is also surrounded by rose flowers. It’s a colourful and vibrant skull nail art design.

A luminant glow of colours is added to the nail art design. It has a beautiful palette of colours. They have a candy-themed mix of colours. Light pastel shades are blended beautifully. Two of the nails have skull patterns with floral patterns around them. And they are all made in a 3-dimensional manner. A cute bow has also been placed on the skull. Silver stones have been studded around the patterns.

This is a very graphic nail art design with a scary effect. One of the nails has a terrifying skull pattern on it. But the main attraction is the blood dripping pattern made on two of the nails. It has an eerily realistic appearance. One nail has a mysterious pattern like an ouija board. One nail also has a cross pattern on it.

This is an awesomely styled nail art design that has skull patterns. Shiny black paint is made on the nails. The nails which have patterns or stickers have a matte finish. There are two skull patterns- a female skeleton and a male skeleton. The skulls have a red bow and scarf on them. Cobweb patterns are also made on a red background.

This is a greatly detailed nail art design based on a dark grey shade. It has a cracked skull which looks very artsy. It has an ashy finish made on the skull pattern which adds an eerie look. The highlight is the skeleton hand made in a projected manner. It also has stones studded on it.

So we hope you managed to decide on which skull nail art design to try out first! Have a great time styling your nails!